Vendors Focusing on the Development of Electric and Hybrid Propulsion-Based Aircraft Models.

The vendors across the electric aircraft industry are showing major interest in the development of electric and hybrid propulsion aircraft. For this several vendors are collaborating with electric propulsion engine manufacturers to build up a strong relationship with propulsion system manufacturers in the electric aviation market. For instance, the ultralight electric aircraft model eDA40 of Diamond Aircraft company are being powered by EP Systems and Safran made electric propulsion systems. Similarly, another model of Diamond Aircraft that was developed in 2018 in collaboration with Seimens wherein the companies collaboratively developed hybrid engines for operation in HEMEP aircraft model.

Most of the electric aircraft vendors face major challenges during the certification of the aircraft models that is one of the major restraining factors hampering the market growth. The regulatory authorities such as Federal Aviation Administration (FAA) are announcing new regulations for the certifications of electric propulsion-based aircraft models. For instance, in September 2021, the FAA announced special conditions for airworthiness standards of electric propulsion systems in commercial aircraft. Such announcements by FAA have brought new relief to the electric aircraft manufacturers as they can now fully focus on the baseline requirements of regulatory authorities for the approval of their respective aircraft models as there were no specific regulation requirements that had been shared by FAA before. Such developments have been pushing the electric aircraft manufacturers to develop reliable solutions based on the market requirements

Development of eVTOL (Electric Vertical Takeoff and Landing) Aircraft to Provide Future Opportunities for Market Vendors During the Forecast Period.

The favorable government initiatives from leading countries and a growing number of startups entering the market fuel the adoption of eVTOL air aircraft models. For instance, in December 2021, the Australian government announced a grant worth US$ 23 million to explore the application of new aviation technology as part of its Emerging Aviation Technology Partnerships Program. The funding aims to accelerate the adoption of urban air mobility transportation, which consists of drones, eVTOL aircraft, and alternative propulsion systems. Similarly, in April 2022, Airbus and ITA Airways signed a Memorandum of Understanding to collaborate on urban air mobility (UAM) in Italy. The agreement also focuses on the safe and sustainable launch of CityAirbus NextGen eVTOL aircraft.

In European countries, the first flight of air taxis is expected to occur by 2024. Most European firms have announced developments of urban air mobility vehicles for passenger. Thus, as per the European Union Aviation Safety Agency (EASA), commercial use of (air) taxis can start by 2024 or 2025. In addition, according to FAA, the US is engaged with more than 15 eVTOL aircraft manufacturers. Uber Air, EHang, Volocopter, Joby, and Lilium GmbH are among those who have forefront their intent to launch commercial passenger operations within the next three to five years across the US aviation industry. Thus, upcoming developments and initiatives from leading countries for incorporating the adoption of air taxis would strengthen the demand for urban air mobility, which is expected to provide lucrative opportunities for the eVTOL aircraft market growth during the forecast period.

The aviation industry accounts for nearly 2.7% CO2 emissions worldwide which is one of the major factors generating the concerns for aviation regulatory authorities for the reduction of harmful emissions caused by aviation industry. Several regulatory associations are majorly focusing pushing the vendors for the development of low cost and low emission-based aircraft propulsion systems which is one of the major factors pushing the development of electric propulsion systems for electric aircraft models. Moreover, the vendors across the aviation industry are also taking several initiatives to enter the electric propulsion technology for future innovations in the aircraft ecosystem.

Many aircraft propulsion manufacturer companies are also focusing on the development of hybrid propulsion system that can accommodate electric as well as jet fuel systems. For instance, in July 2022, GE Aviation announced that it has successfully completed the testing of megawatt (MW)-class and multi-kilovolt (kV) hybrid electric propulsion system in altitude conditions that simulate single-aisle commercial flight. Similarly in September 2022, Electra.aero announced that it has completed a fully integrated test of its hybrid-electric propulsion system for the eSTOL aircraft. Such developments are likely to generate huge opportunities for electric aviation or electric aircraft market during the forecast period. 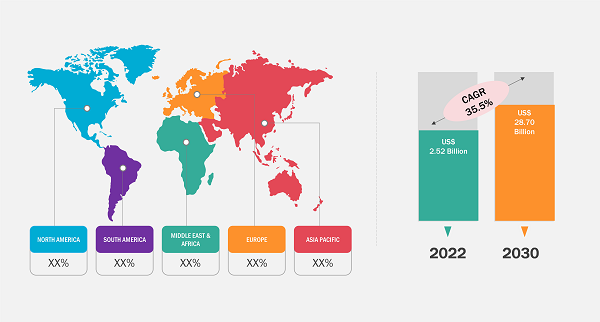 The electric aircraft market has undergone several significant developments, and a few of these have been mentioned below: