The US, Canada, and Mexico are among the major economies contributing to the managed pressure drilling market in North America. The region is known for adoption of modern technologies, elevated standards of living, and well-developed infrastructure, among others. According to Statista data, oil production in North America accounted for 23.5 million barrels per day in 2020, and the figures increased by ~9.3 thousand barrels per day during 1998–2020. Oil production includes the production of crude oil, shale oil, oil sands, and natural gas liquids (NGLs, i.e., the liquid content of natural gas, which is recovered separately). It excludes liquid fuels from other sources such as biomass and coal derivatives. North America had crude oil reserves of ~36 billion metric tons in 2020. Canada accounted for 75% of these oil reserves, including its oil sands deposits. The US and Canada are witnessing exceptional growth in the production of shale reserves, fossil fuel, oil sands, and tight oil.  According to the US Energy Information Administration data, the US exported ~8.51 million barrels per day MMb/d of petroleum in 2020. It produced ~18.40 MMb/d of petroleum while consumed ~18.12 MMb/d in this year. According to the International Trade Administration data of 2021, Mexico is one of the world’s largest oil producers; it produced 1.9 million barrels daily in 2020; further, it is the third-largest oil producer in North America, after the US and Canada. In 2020, Mexico ranked 21st in terms of crude oil reserves, 13th in terms of crude oil production, 16th in terms of refined capacity, and 5th in terms of logistics infrastructure, in the world. Through new bidding plans issued in the Gulf Coast of the United States, the Gulf of Mexico, Nova Scotia in Canada, Southeastern Newfoundland, coast of Alaska, the Pacific and Atlantic Region on the list, the region is presenting promising new opportunities for several international oil companies. Therefore, with increasing oil & gas production, and onshore and offshore drilling projects, the use of managed pressure drilling equipment is also on rise in North American countries.

The North American market suffered considerable economic losses in the first two quarters of 2020, owing to the high count of COVID-19 cases, especially in the US. The economic growth was slowed, which directly impacted various manufacturing & construction activities across the region. This pandemic has disrupted the construction activities in the oil sector and subsequently impacted the demand for managed pressure drilling during the early months of 2020 due to the stoppage of oil extraction activities. Moreover, the considerable decline in the overall global oil prices further restricted the oil-related projects and other activities that negatively influenced the region's demand for managed pressure drilling. A similar trend was also witnessed in other North American countries, i.e., Canada and Mexico. However, in 2021, with the relaxation of lockdown measures and resumption of manufacturing of MPD equipment & machinery started, the managed pressure drilling market in North America is likely to grow. 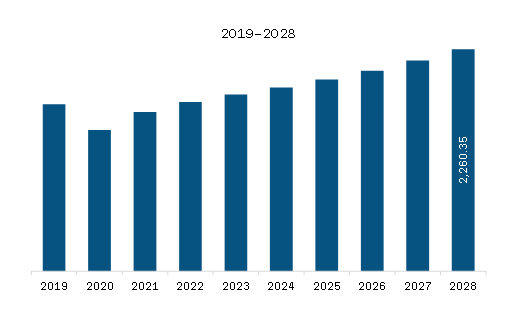 The managed pressure drilling market in North America is expected to grow from US$ 1,621.99 million in 2021 to US$ 2,260.35 million by 2028; it is estimated to grow at a CAGR of 4.9% from 2021 to 2028. Proliferation of industry 4.0; digital transformation initiatives, involving technologies such as artificial intelligence (AI), the Internet of Things (IoT), and robotics and advanced analytics, drive the 4th wave of the industrial revolution, Industry 4.0. As a result, spending on advanced infrastructure has significantly increased. Digital transformation is fueling several industry initiatives, and a progressive shift to actual-time data access and intelligence is transforming the way enterprises conduct business. The previous decade experienced massive upgrades in technologies employed in various sectors, including the oil and gas sector. The overall oil and gas operations, especially the volatile and risky work conditions, have led companies to adopt the Industry 4.0 technologies to ensure safe and efficient operations, cut costs, and optimize manual processes. Moreover, automated drilling technologies are expected to reduce drilling time and cost by 30–35%, compared with a conventional drilling rig, thus making wells economically feasible, enabling drilling of smaller targets, and adding a higher number of infill production wells. Therefore, the Industry 4.0 would introduce new trends such as fully automated drilling operations, thereby bolstering the growth of the North America managed pressure drilling market in the coming years.