The increasing innovations across guided missile technologies by vendors of market is one of the major factors pushing the adoption of such technologies. Majority of the precision guided munitions market players are majorly focusing on the development of advanced sensor-based guided missiles that also provide increased range with greater reliability on target accuracy. For this guided missile manufacturers are trying to implement several advanced components such as high-performance GNSS receivers & antennas, TMV telemetry transmitters, advanced anti-jamming GNSS, and tactical data link systems to guided missile technology that provides support to perform the respective operation with increased capabilities. Further, the growing deployment of guided missiles for countermeasure applications across ground, naval and airborne platforms is another major factor pushing the vendors of this market to develop new and advanced products for the armed forces. For instance, in August 2022, the Defense Research and Development Organization (DRDO), India announced that it has successfully tested laser-guided anti-tank guided missiles (ATGM) from main battle tanks for the Indian army. Such developments are catalyzing the market growth.

Ground segment is expected to dominate the market in 2022 and is expected to retain its dominance during the forecast period as well. This is owing to increasing development of anti-tank and anti-aircraft guided missile systems by different vendors the are providing guided munitions for ground platforms. The precision guided munitions market players are also collaborating with several defense forces to understand their specific requirements and provide relevant solutions

Increasing Developments in the Loitering Munitions to Provide Future Opportunities for Market Vendors During the Forecast Period.

The rising introduction of new and advanced loitering munitions by different vendors is another major factor pushing the deployment of precision guided munitions across various armed forces. Several armed forces are investing heavily in the procurement of such systems to increase their defense power.

The increasing deployment of UAVs across different armed forces is further propelling the demand for UAV launched loitering munitions, which is a major factor encouraging the vendors in this market to develop such products in collaboration with different armed forces. For instance, in April 2022, Solar Group became the first Indian company that has collaborated with Indian Ministry of Defense for the development of UAV launched loitering munitions for the Indian army wherein the company has plans to invest over US$ 25 million. Such instances are likely to open new market opportunities for market vendors to enter the market and cater to the growing market demand.

The growing investments by defense authorities across different countries is another major factor supporting the adoption of precision guided munitions worldwide. The government of different countries are constantly increasing their spending on their armed forces owing to rising tensions between several countries such as Russia-Ukraine, India-China, China-Taiwan, US-Russia, and Germany-Russia. After the Russia-Ukraine war began in February 2022, many countries announced an additional rise in their military expenditure for FY 2022 based on their previous spending plans. This is expected to support the investments in the procurement of ammunitions and guided munitions across different ground, airborne, and naval forces. Also, several armed forces have also awarded multiple contracts to different vendors for the development and procurement of precision guided munitions worldwide. For instance, in November 2021, EDGE Group won a contract worth US$ 880 million to supply of precision guided munition to UAE armed forces. 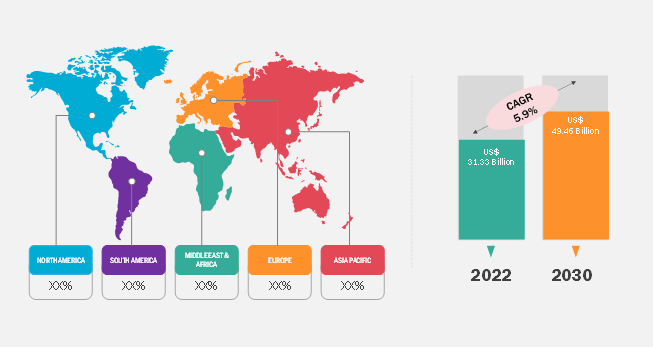 The precision guided munition market has undergone several significant developments, and a few of these have been mentioned below: